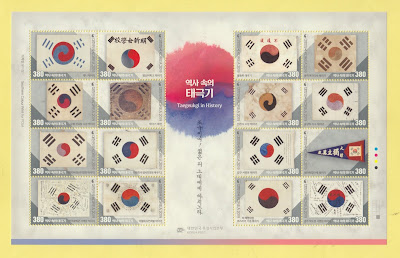 Taegeukgi is renowned as the most philosophical of all the national flags in the world. But did you know that up until 100 years ago, many different types of Taegeukgi existed? Korea Post is issuing commemorative stamps that feature the different faces of Taegeukgi that most people are unfamiliar with.

In the later years of the Korean Empire, King Gojong bestowed a gift to a United States diplomatic advisor named Denny. The gift was none other than Taegeukgi, which came to be known as O. N. Denny`s Taegeukgi. This oldest extant Taegeukgi is estimated to have been made in 1890 and is currently held at the National Museum of Korea.
The wave of modernization that started with the proclamation of the Korean Empire in 1897 prompted the creation of Taegeukgi for educational purposes. For example, Taegeukgi at Seongyojang House, Gangneung is known to have been created and used by the students of Dongjin School in Gangneung in the early 1900s. Myeongsin School for Girls (presently Sookmyung Girls’ Middle School and High School) also created their own Taegeukgi in 1906 when the Honorable Princess Consort of the Eom Clan founded the school. Also, Taegeukgi of Dongduk Women s Academy was flown on the foundation day of the school in 1908.

Sadly, the loss of national sovereignty took place almost concurrently with modernization. Under the Japanese occupation, Taegeukgi became a symbol of resistance. The Japan-Korea Treaty of 1905, also known as the Eulsa Unwilling Treaty, enraged many, including Go Gwang-sun, a general of the righteous army. In 1907, General Go created Taegeukgi with Chinese Characters Meaning Liberation is Not Far Off and led the anti-Japanese movement.

While the creation of Taegeukgi Woodblock, which had Taegeukgi engraved on a woodblock, enabled the mass production of Taegeukgi for the March 1st movement, Taegeukgi Embroidered by Nam Sang-rak was made by the independence activist Nam Sang-rak who hand-stitched the entire flag on silk and used it as part of the Korean independence movement on April 4, 1919. Taegeukgi at Jingwansa Temple was said to have been made by the monks who participated in the March 1st movement.

Korean people s yearning for independence reached the United States through Taegeukgi. Taegeukgi with Chinese Characters Meaning Long Live Korean Independence! on a triangular pennant and Taegeukgi with Kim Gu`s Writings and Signature which Kim Gu gave to Maeusa, a Catholic priest who was leaving for America, clearly prove how the spirit of independence was alive both inside and outside Korea.

Korea finally gained independence on August 15th 1945, and the oaths for the continuing effort to regain full sovereignty are written on Taegeukgi with Writings and Signatures of the Soldiers of the Korean Liberation Army.

The Korean peninsula was again swept up in turmoil with the onset of the Korean War on June 25th 1950. Taegeukgi with the Writings and Signatures of Gyeongju Student Soldiers which represents the iron will of the student soldiers, and Yi Cheol-hui`s Taegeukgi with Chinese Characters Meaning Outbreak of War, which illustrates the army s forward passage and their military spirit, can be viewed at the Independence Hall of Korea in Cheonan.

During the Second Battle of Seoul, a U.S. marine named Busbea was handed a Taegeukgi by Korean citizens. This Taegeukgi, which is called Taegeukgi Donated by A. W. Busbea, a U.S. Marine can be found at the Hanam Museum of History.

These sixteen images on the commemorative stamps display the history of Taegeukgi, in which Koreans spirit and yearning for independence breathe soundly. As we celebrate the upcoming Independence Day, we hope that these stamps will provide everyone with the chance to reflect on our history and show profound gratitude to those who fought for the country s independence and freedom