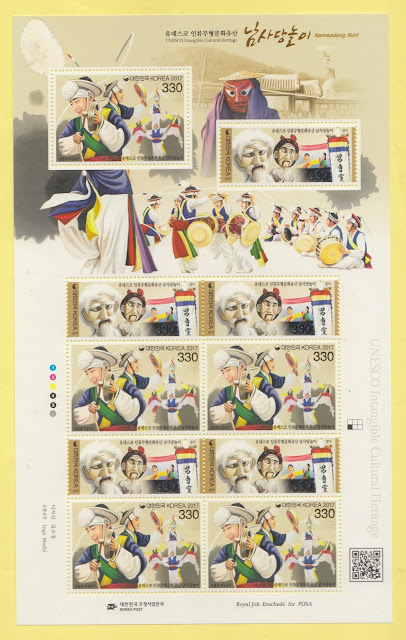 Namsadang Nori (National Intangible Cultural Heritage) literally means the all-male vagabond clown theatre.  It is a traditional folk performance of various genres, such as musical instrument performances, dance, play and acrobatics, staged in an outdoor area.  In September 2009, Namsadang Nori was inscribed on the Representative List of the UNESCO Intangible Cultural Heritage of Humanity, and thus the value has been recognized around the world.  Namsadangpae , which performs Namsadang Nori by traveling around the country, is a theatrical troupe comprised of people from the lower classes in the Joseon Dynasty.  Led by Ggokdusoe, Namsadangpae features 40-60 members including Gombaengisoe, a performance planner, Ddeunsoe, a person in charge of performances in each genre, Gayeol, a performer, Bbiri, an entry level member, and "Jeoseungpae, a senior member, as well as young errand boys and porters who carry the equipment.  All members have been trained under a strict order of rank and hand down the skills systematically.  Namsadang Nori is made up of six components: Pungmul, a segment of farmers music to attract people by playingthe percussion, such as gongs, double-headed drums and animal hide drums; Beona, a display of hoop-spinning with a wooden stick; Salpan, an acrobatic segment performed on the ground with comic dialog and music; Eoreum, a tightrope walking act where an acrobat on a high-wire is engage in witty exchanges with a clown below; Deotboegi, a mask dance depicting people from different social classes; and Deolmi, a puppet play where puppets on the stage exchange jokes with musicians.  Namsadang Nori was not just about providing enjoyment to the audience.  It spoke for the weak and sent messages by satirizing irration alities of the time and exposing social problems.  In particular, Deotboegi, a mask dance, and Deolmi, a puppet play, raised the morale of oppressed lower-class citizens and women by satirizing and making a mockery of the incompetent and corrupt aristocrats, and critizing tyranny of men under patriarchy.
Posted by Jefferson at 3:16 AM