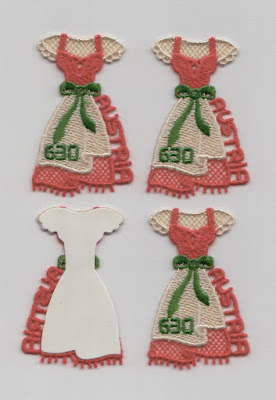 Following on from last year’s Lederhosen stamp, this year we are introducing yet another special innovation in the form of the corresponding outfit for women: the world’s first embroidered silhouette stamp in the traditional form of a dirndl.

In some areas of Austria and southern Germany “dirndl” is used to designate a young girl, and it is almost certainly from this that the name for the dirndl dress was derived. Today’s dirndls often have little to do with the traditional regional costumes: short skirts, low-cut necklines, fancy lacing and bold colour combinations are not to be found in so-called historical traditional costumes. These are, rather, characterised by traditional colours and patterns specific to the region, and – at least in the case of working dress – simple cuts, as the dirndl was and still is worn as the daily working garb in many rural areas. For special occasions and public holidays there is a more elaborately designed and decorated traditional costume with embroidered ribbons and scarves, silk aprons, often full-length skirts and matching headgear, such as the golden bonnets from Upper Austria.

For a long time the dirndl was considered old-fashioned and “fusty”, but in recent years it has become increasingly common to see women and men wearing traditional costume in urban areas too. This is probably largely connected to the rising popular- ity of “Wiesen” festivals, which, taking as the basis Munich’s Oktoberfest, have become increasingly widespread throughout the world. For these it is most often the modern version of the dirndl that is worn – as sexy and eye-catching as possible.

The dirndl stamp is particularly impressive in the method of production. The Vorarl- berg company Hämmerle & Vogel, based in Lustenau and specialising in high-quality embroidery, is responsible for both the design and the manufacture. Each stamp is made from around 40 metres of thread in three colours. The embroidered silhouette, the different colours and the various stitches make the dirndl appear three-dimen- sional whilst at the same time creating a light and airy effect. You can even see the way the material drapes and folds. The dainty blouse is executed in off-white, as is the apron, using a different stitch. The red dirndl dress and the inscription “Austria”, also stitched in red, create a little red-white-red work of art. The bow on the apron and the denomination in green are particularly eye-catching.

Hämmerle & Vogel is a family run firm from Vorarlberg with a long history, that has been producing embroidery for international customers including fashion houses such as Chanel, Marc Jacobs, Victoria’s Secret and Agent Provocateur for over
100 years. A total of 5.6 million metres of thread were used to make the dirndl stamp. Hämmerle & Vogel has already made several embroidered stamps for Austrian Post, including an Edelweiss a gentian motif and a petit-point embroidery.
Technical Details 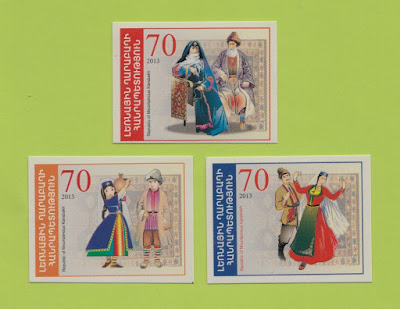 The four beautiful stamps provide insight into women’s national costumes in Greenland. There are regional differences in the outfits, depending on whether they are produced in North, South, West or East Greenland.
Posted by Jefferson at 4:24 PM No comments: Links to this post 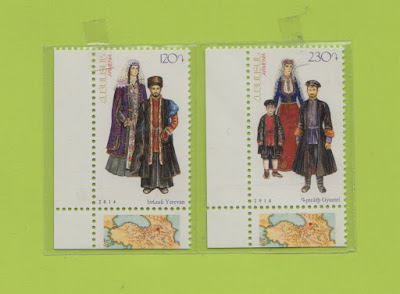 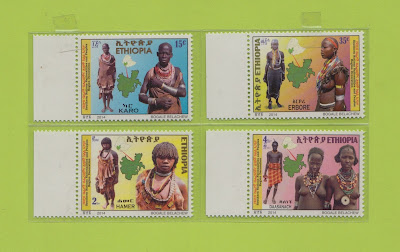 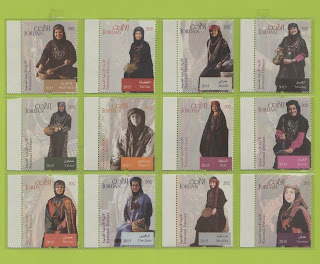 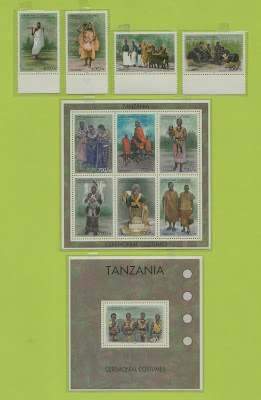 400 Tanzanian Shilling - Wanyaturu Girls in Their Outfit
Posted by Jefferson at 7:15 PM No comments: Links to this post 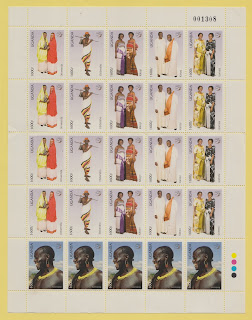 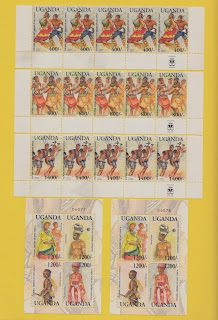