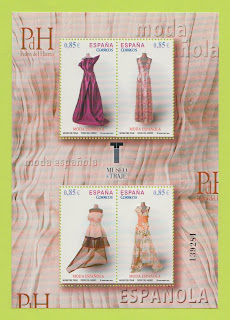 SPANISH FASHION
The son of a painter, Pedro del Hierro (Madrid, 1948) shows very young artistic talents in drawing and fashion, composing highly original designs. After acquiring training and expertise in the art of fashion, in 1974 he presented his first collection. Two years later, 1976, he entered the House of Haute Couture and show their collections in New York, several countries in Latin America and Europe, where it begins to be recognized. In 1981 he opened his own shop in a department store, synchronizing with the prêt a porter and haute couture dresses creating personalities and international events. In 1987 embarks on new projects related to fashion and accessories. His reputation is on the rise and in 1990 began designing menswear.

Pedro del Hierro understands fashion "as an evolving constantly changing" and is inspired by the objects of life itself to dress with dynamism and elegance to young and old. The stamps are reproduced images, provided by Cortefiel, which appear in the catalog of the exhibition on the designer in the Costume Museum, Madrid, which preserves these unique pieces. The first of the seals has a long, asymmetrical dress made of satin iridescent raspberry color. Has ample cleavage, with the right shoulder uncovered. The decoration of glass beads are sealed with a laser. Next, a dress made of lace fabric red and ivory, with drawings of flowers and sequins of different colors. V-shaped neckline and armholes tucked.

Below, prom dress short in front and long behind, hand-pleated iridescent pink with brown wires. It consists of two parts: an inner dress with skirt flying short in front and long tail in the back, and a short dress pink overlay. Finally, silk tulle dress with a V-neck and flared skirt flying. It will open from hip to low and decorated with flowers trimmed in ecru fabric.
Posted by Jefferson at 7:31 AM 1 comment: Links to this post