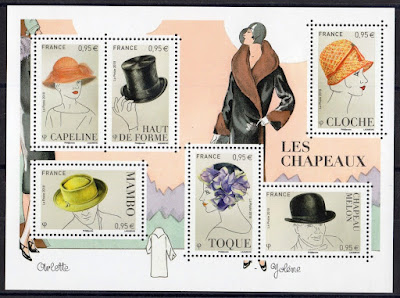 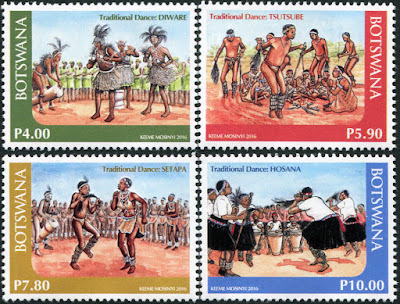 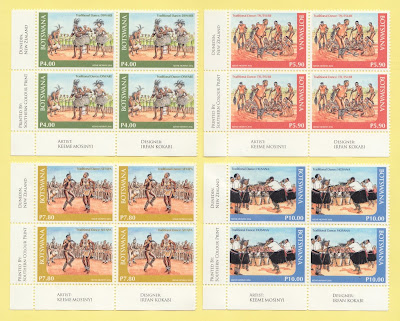 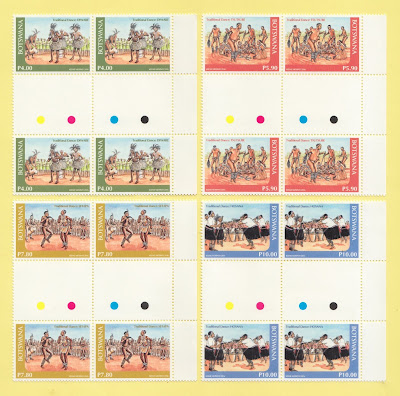 Introduction
This commemorative stamp issue illustrates a sample of diverse Botswana ethnic dances. Various communities sustained identity through dances, the heritage being passed orally by community elders. These dances and songs without instruments addressed socio-psychological needs, such as healing, quest for rain, celebrating a harvest or purification. In the absence of modern technology and medicine, the tradition worked and reassured our ancestors.

In modern day Botswana, these dances and songs create employment and generate phenomenal income as performing arts during various events. They are featured during National Arts Competitions and Festivals and have contributed significantly to nation-building as dance troupes across the country learn dances from areas that are not indigenous to them.

4,00 Botswana Pula - Diware
A unique Hambukushu healing ritual which is still alive today in places like Maun, Gumare, Etsha, and Kasane where traditional healers use song and dance to revive a patient. Traditionally, the Hambukushu would consult a healer, then song and dance would start as women, dressed in long skirts with shawl draped over their shoulders, clap hands and sing Tjmbukushu healing songs for the medicine man. The climax of the ceremony is when the medicine man successfully casts away the illness, reviving the patient into a healthy vibrant person who immediately joins him to perform energetic dance moves in celebration of the healing. Diware performance characterized by healing theatrics performed by the medicine man is built around him and the patient who wear 'special regalia' while the singers, wearing formal clothes encircle them.

5,90 Botswana Pula - Tsutsube
A healing dance of the ancient citizens of Southern Africa, the San/ Basarwa who foraged in the hot/ dry Kgalagadi Desert. Elegantly dressed women adomed with the red ocher paint, long strands of ostrich egg shell beads, clapped their palms and mimicked beautiful songs. Agile and great medicine men encircle the group, the sick lay helplessly in front of the fire. The healing songs last all night and at dawn when enough energy has been transferred through the fire, loud songs and dances to the sick, suddenly the medicine men pounces on the sick and they are instantly healed and proceed to join the dances in celebration of the healing.

7,80 Botswana Pula - Setapa
A dance of the Bangwaketse of South-East Botswana. The dance evolved from the Setswana word, "go-tapa-tapa" meaning forward food stamping it has borrowed styles from the San/ Basarwa and form mine workers wearing boots (gum-boot dance). During the harvest season, young men and women congregated to sing a songs of their ancient warriors, appreciate the good harvest or convey social concerns to their leaders. Men wear skin and leather while women wear the same and accessories with the red ocher and ostrich egg shell beads and ankle raffles that provide the rhythm of the dance.

10,00 Botswana Pula - Hosana
An ancient song and dance of the Bakalanga (North Eastern Botswana) associated with the quest for rain, performed for the rain god Mwali, located in alow hill with a cave. The Hosana dancers were a group of women who had once manifested a common illness but had since healed. They were led by an needs of the community to Mwali through the medium of the millet beer prepared by Hosanas. During the ritual performance, at midnight, a coded voice is heard from the cave, with a response from the rain god. The dancers wear black skirts, while t-shirts and heavy black and white glass beads. They dance very fast and clap their hands with a lot of drumming. They were well respected by the community.

Seperu
The Seperu dance is performed by the Basubiya community on ceremonial occasions including the installation ceremony of a chief, weddings, the harvest home (letsema) and the arrival of special guests. The unique elements of the dance include the flywhisk, the whistle and the peacock shaped "mushishi" dress, a layered dress that lakes the shape of a peacock's tail. The male dancer leads a succession of skilled women dancers in pairs as a group of vocalists encircles the dancers, singing, and clapping throughout the performance.

Sebirwa
This dance was for social purification "go phasa" by the Babirwa of Eastern Botswana. Sebirwa is dominated by loud drumming, whistles and hand in rattles, female lead dancers inn colourful dresses lead the dance in procession from a starting place a destination.

Polka
Polka was originally called Boerewalf. It is said the dance came to Botswana with the white farmers and Dutch people. It is the staple dance in the South Western part of Botswana. The Polka has now reached mainstream and it is now recognised among Botswana's traditional dances often being featured at national commemorative events countrywide.
Posted by Jefferson at 8:29 AM No comments: Links to this post

Posted by Jefferson at 5:31 PM No comments: Links to this post 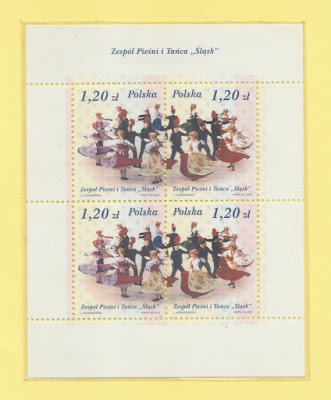 Śląsk: The National Ballet of Poland
ŚLĄSK has been acclaimed as: "One of the grandest and most dazzling spectacles in the world."

The "Śląsk" Song and Dance Ensemble was founded in 1953 by Prof. Stanisław Hadyna, who also became its art director. Śląsk Ensemble has performed more than 6000 shows for over 20 million people worldwide.

ŚLĄSK is an ensemble of 90 singers, dancers and & musicians who enchant audiences in 1600 vibrant costumes which represent different regions of Poland.

With one of the world's most beautiful choreographic, vocal and musical performances, ŚLĄSK is a colorful and impetuous kaleidoscope of Polish national and folk culture. This Gala Concert includes dances and songs from 15 regions of Poland, as well as, the national Polish dances including Polonaise, Mazurka, Kujawiak, Oberek and Krakowiak.
Posted by Jefferson at 5:23 PM No comments: Links to this post 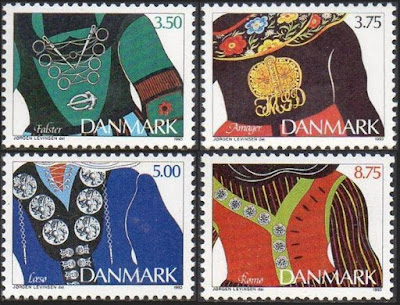