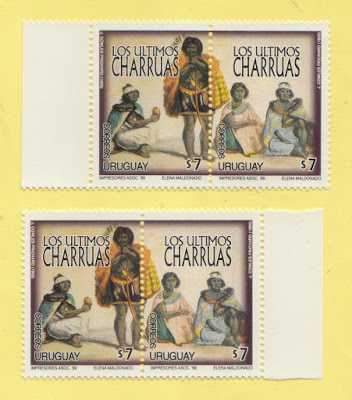 The stamps illustrate a valuable iconographic document made by Delaunois when these Charrúas were taken to Paris in 1833.

The picture was published by Dr. Paul Rivet in his well-known work ―Les Derniers Charrúas˜ in 1930. It is believed that the artist has captured this image in a corralón where they were exhibited as animals for the Parisian society of the time.

Although the drawing does not convey the real physiognomy that the group surely showed since it is known that they were in an advanced state of malnutrition (the sheet shows them robust) and that the clothes surely do not respond to the original ones of the Charrúas, the document has a high historical value for being one of the last known images of these Charrúas.

The Charrúas that appear in the drawing are: the cacique Vaimaca-Peru (famous lancero of Artigas), the healer Senaqué, the young warrior Tacuabé (recognized horse tamer) and his companion Guyunusa with whom the latter had a daughter.

The Last of the Charrua: The Honored Warrior Tribe of Uruguay

Uruguay is said to be the only Latin American country without an indigenous population. However, they did have a fearsome warrior tribe living in the country for thousands of years. Believed to be the last, or only, true Uruguayan indigenous culture, the Charrúa lived in Uruguay and neighboring areas of Argentina and Brazil starting 4000 years ago. The genocide of the Charrúa began in 1833 by Uruguay's first president, with four captives being sent to France as a sideshow. Recently debate has re-emerged on the existence of full-blooded descendents of this indigenous tribe thought to be extinct.
The Origins of the Charrúa Culture

The Charrúa people were semi-nomadic hunter-gatherers who lived throughout Uruguay and the Northeast of Argentina as well as Southern Brazil. It is known that they were adept with the bow and arrow and when horses arrived, they became quite good at hunting wild cattle.

Historians assert that the Charrúa culture was created as a mixture of the caingang and thepatagones collectives. Their language is believed to be related to the mataco-guaicurú family. The origins of the name 'Charrúa' are disputed, with some historians suggesting indigenous roots and others favoring Galician instead.

The Charrúa warriors became very skilled in battle and for this reason they are pivotal heroes in modern Uruguayan culture. Allegedly, the Charrúas killed the Spanish explorers on their first arrival. This led to three centuries of resistance and rebellion. Not only did the Charrúas fight against the Spanish; they were also involved in battles at times against the British, Portuguese and later Brazilian powers.

The undoing of the Charrúa culture was not fear or weakness. The Charrúa are believed to have drunk from the skulls of their dead enemies during ceremonies and cut themselves or even remove their finger joints at the death of a loved one.

The decline of the Charrúa culture began with intermarriage with Europeans. After the Charrúas had proved their strength against their opponents, they began to trade and intermingle. This left them open to foreign disease and a decline in their genes.

This decrease was nothing in comparison to the devastating event that took place on April 11, 1831. It is on that day at Puntas del Queguay, the terrible massacre known as the "Slaughter of Salsipuedes" (translated as "Get out if you can") took place.

The first Uruguayan president, Fructuoso Rivera, originally had a peaceful relationship with the Charrúa, however tension increased as European settlers began to advance onto the Charrúa land. The response of the Charrúa was to attack these small settlements.

Documents show that on April 11, 1833, Rivera met with the main Charrúa chiefs - Polidoro, Rondeau, Brown, Juan Pedro and Venado – and their tribes, supposedly to discuss the protection of the State’s borders. Then he gave the Charrúa large amounts of alcohol, and once they were drunk he brought in his men to kill them.

After the Slaughter of Salsipuedes, four Charrúa members were reportedly captured and sent to France, where they were "put on display" for Parisians in 1833. For most Uruguayan historians and anthropologists, they were the last of the Charrúas - the famous four Charrúas depicted in the monument found in Montevideo today. Their names were: Vaimaca-Perú - the chief, the 'curandero' or shaman - Senaqué, the young warrior Tacuabé, and his partner, Guyunusa, along with their newborn daughter.


The Charrúa in Modern Uruguay

In 2002, the remains of Vaicama-Perú were returned to Uruguay, where they received a hero's welcome. Vaicama was subsequently buried in the national pantheon. Before he was interred however, his DNA was tested. The results show that Vaicama came from the local Charrúa culture with a lineage of over 1,600 years.

Recently debate has re-emerged that there are full-blooded descendents of the Charrúa culture living in Uruguay. The individuals who declare themselves as indigenous Charrúa are fighting to reclaim their rights. This issue has been hotly debated as history has continually taught modern Uruguayans that all indigenous Charrúa were killed during the genocide and those who remained are of mixed-blood. Modern Uruguayan anthropologists disagree with the descendents claims as well. This question and the legal consequences continue.

Nonetheless, the Charrúa spirit lives on not only in the blood descendents, but also in the honor of the strong Charrúa warrior in modern Uruguayan culture. The use of the "charrúa" now also refers to modern day Uruguayan soccer players who also often see their matches as battles. Charrúa is also a term used in conversation when a person is faced with seemingly insurmountable obstacles, but they achieve their goals.
Posted by Jefferson at 5:54 PM